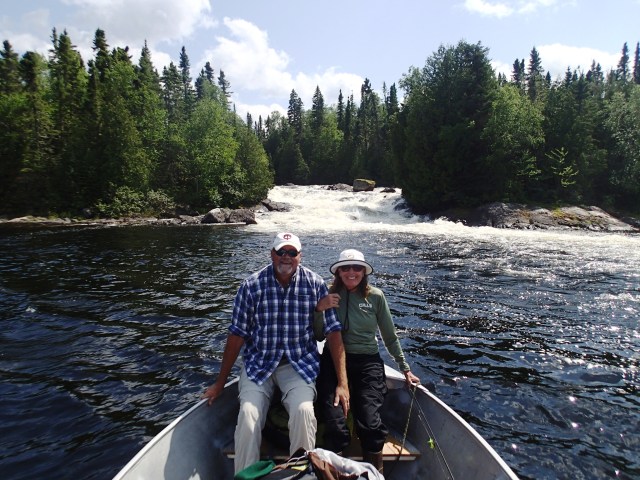 Linda and I greatly enjoyed a week at Ghost River Lodges on Marchington Lake near Sioux Lookout Ontario in July 2019. It is a unique setup, a big flat bottom boat picked us up at the landing, we loaded our gear and supplies, parked the truck in a secure location and we were off for a week of fishing and relaxation! 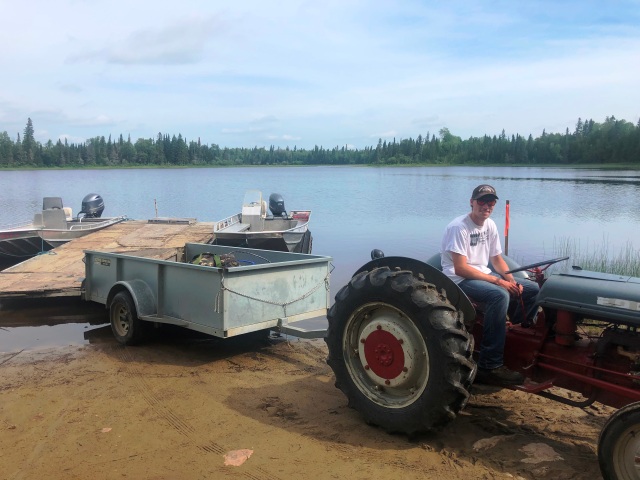 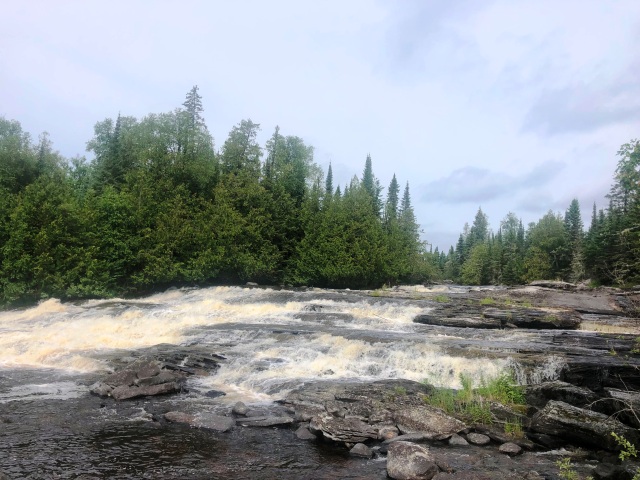 A very nice young man named Aaron helped us unload our gear again into a trailer pulled by an old  Ford tractor, which made the portage around these rapids to load on to yet another big flat bottom boat which brought us to the resort (our cabin was on the far left). 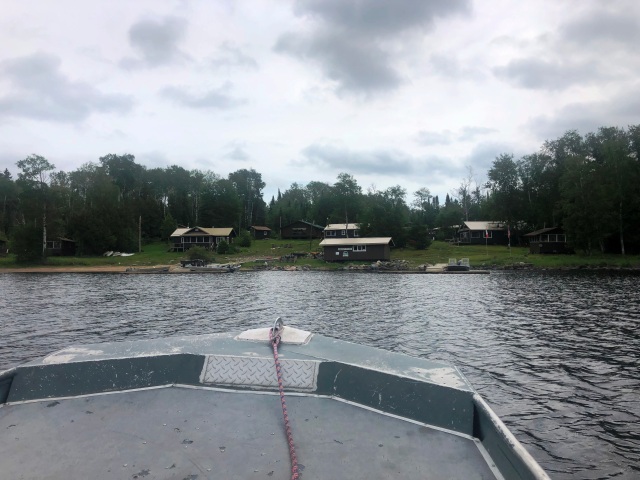 Ghost River Lodges is a well run operation with very nice people. Darrell, Tena and Chelsea Kartinen provide great service and hospitality. I like how they promote catch and release by offering a discount for guests with conservation licenses (keep 2 Walleyes per day, vs 4).

Ghost River Lodge is located just off the Canadian National Railroad tracks (the same train that we took last year to start our Wabakimi canoe trip in Armstrong).  They rent a box car to deliver fuel, building materials and other supplies to the lodge.  The owners and staff take the train to start opening up camp before the ice is off the lake.  The train rumbles past the resort every few hours.

A float plane dropped in and cruised up to the dock, handed off a barrel and quickly took off again.  Darrell told me that they deliver fresh minnows nearly every day.  Planes, trains, boats and automobiles – oh my! 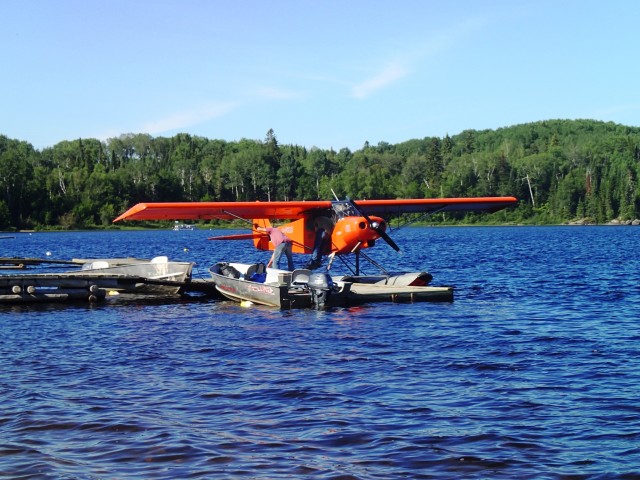 After getting situated in the cabin, we went out fishing for a few hours.  We caught good eating sized Walleyes, enough to pan fry the Walleyes with Cajun seasoning and a side of Red Beans and Rice.  It was nice to relax and read for a couple hours after a great meal. 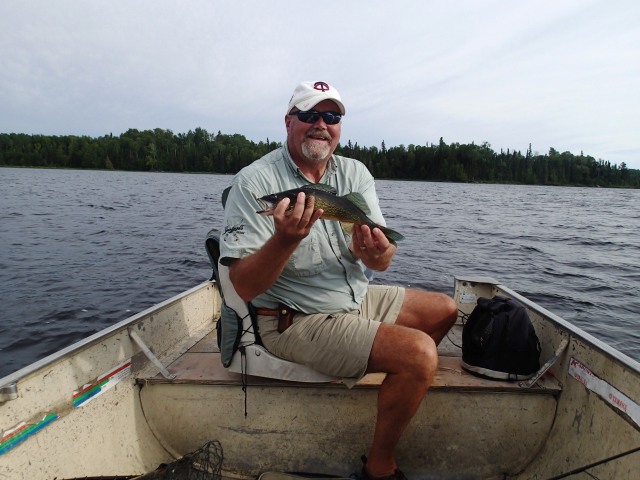 Chelsea was our guide on our first full day of fishing, the first fish of the day was a 22″ Walleye. 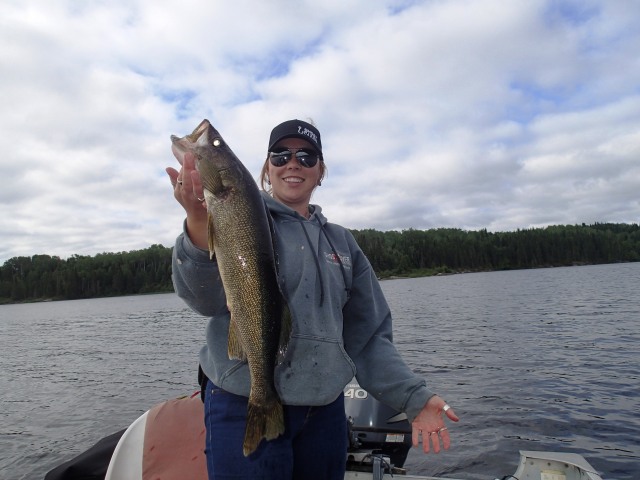 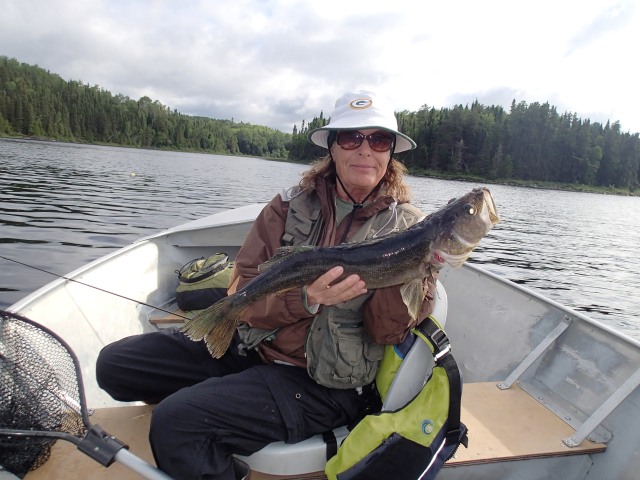 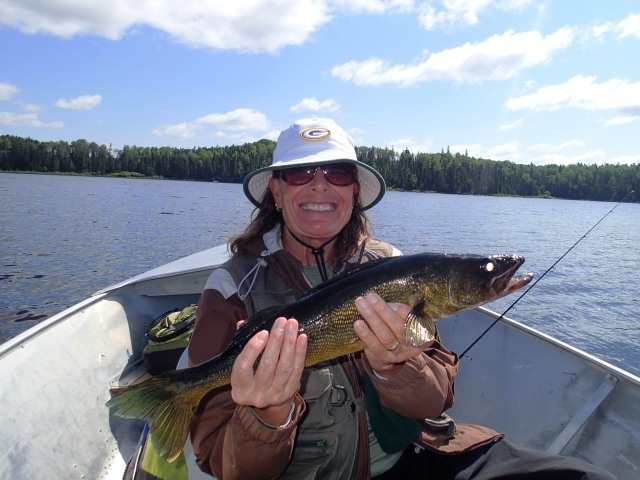 Stopped for a shore lunch at a beautiful spot. 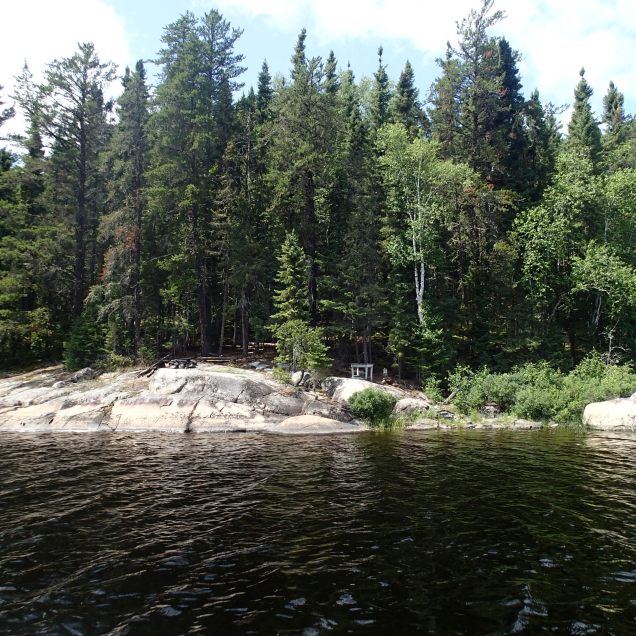 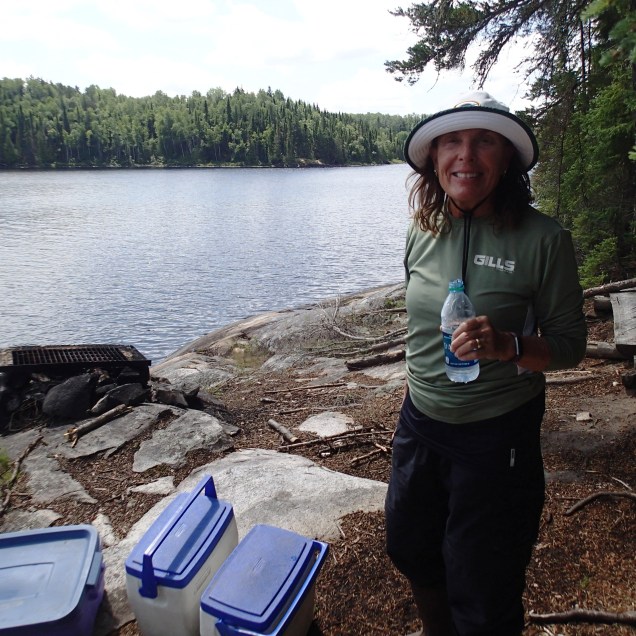 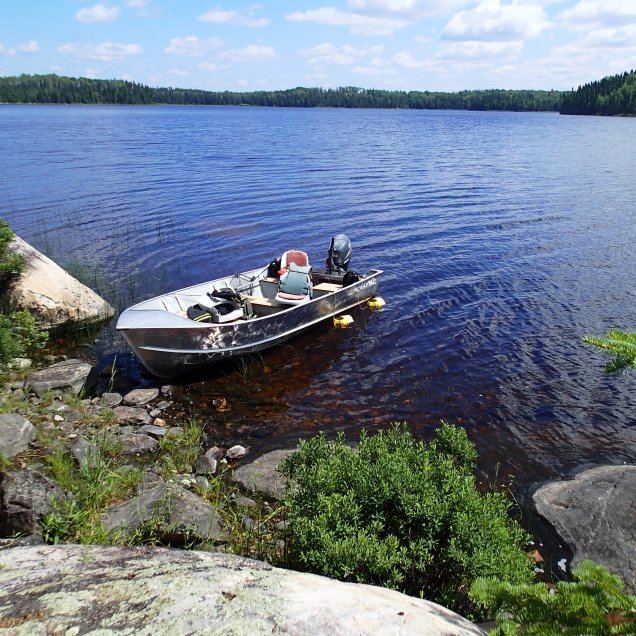 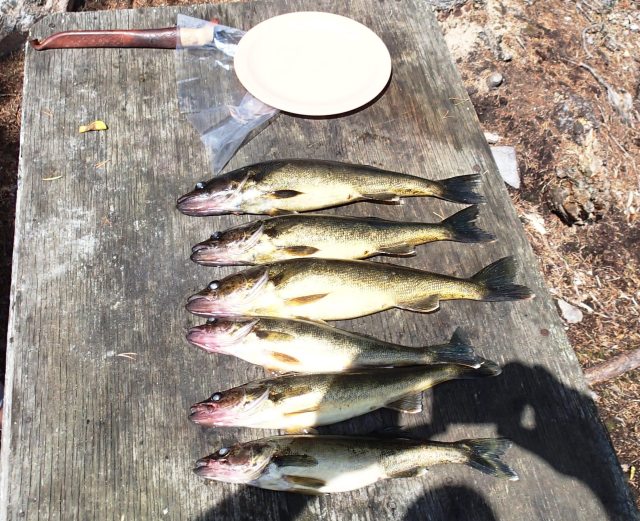 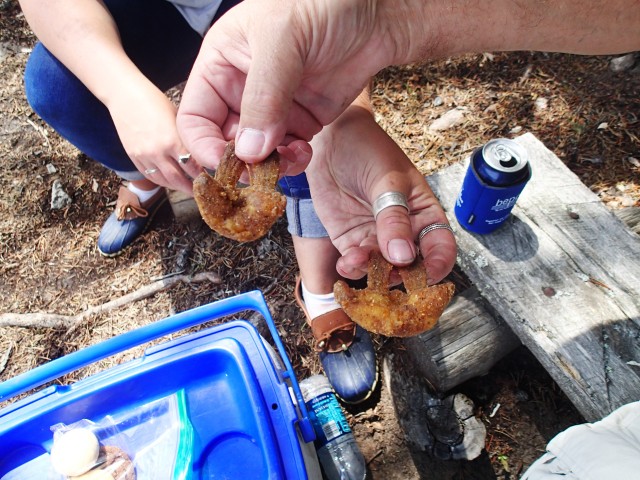 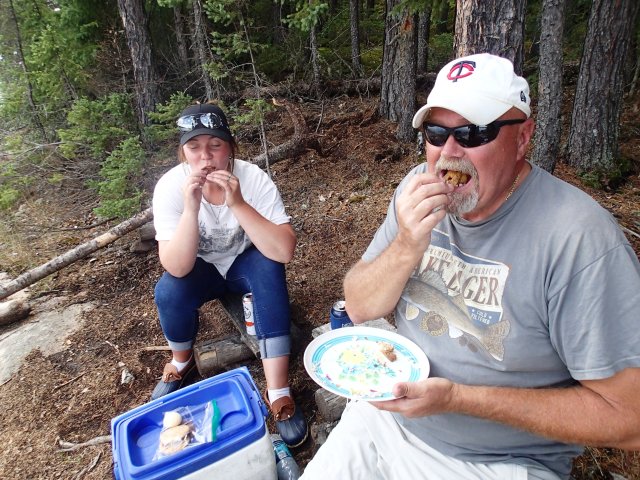 We fished several other spots, which I marked on my GPS and we took a boat ride under the train trestle to fish below the beautiful Twin Falls. 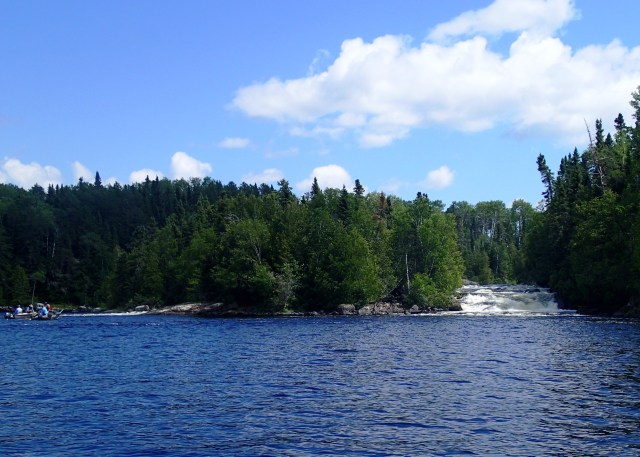 We got back to our cabin in time to enjoy a beautiful sunset after a fun day. 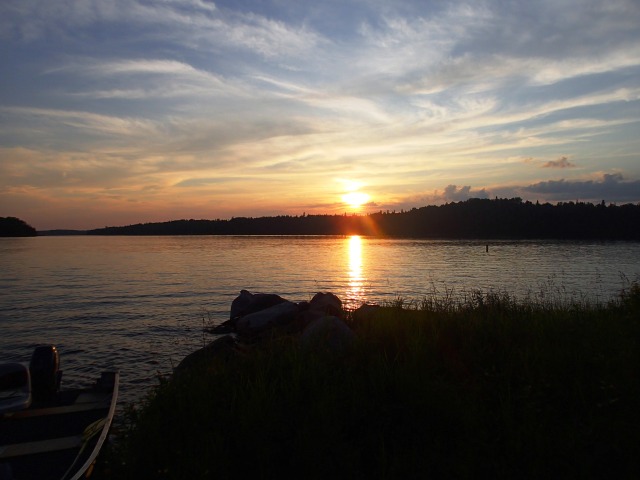 A classic cold front brought strong winds and rain along with a slow down in fishing success.  With fish in the refrigerator, we decided to explore one of the many remote lakes that flow into Marchington Lake.  Some can be reached via portage, with additional boats located on the remote lakes, but we decided to explore the tunnel under the train to Clamshell Lake.  Darrell had explained that a rope would be provided to allow me to pull the boat through the tunnel.  As expected, going upstream against the current was more difficult, but a great adventure. 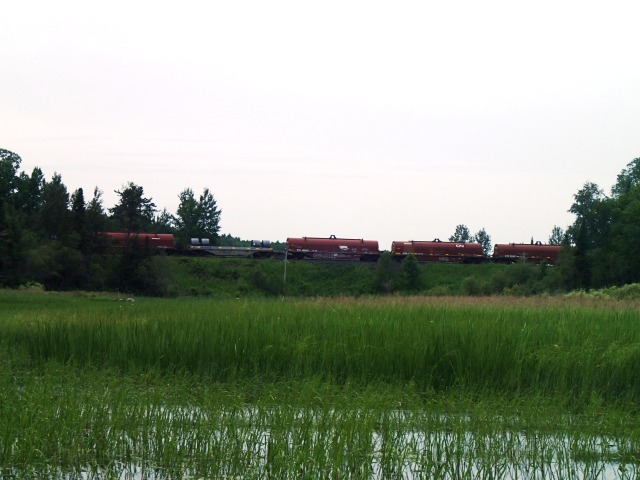 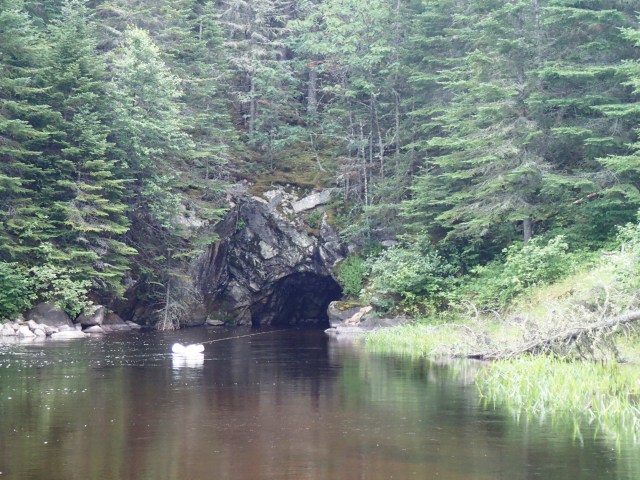 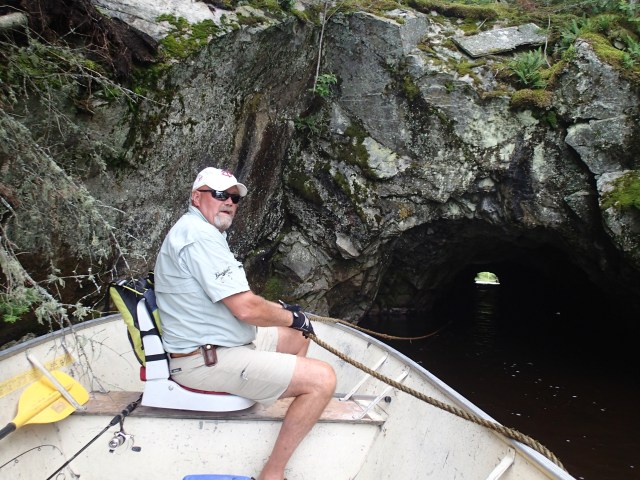 Clamshell lake is a catch and release lake, so we tossed back all of the fish taken on this lake.  As we watched the clouds build up for another storm, we decided to get to the main lake.  Navigating the tunnel with the current was much easier. 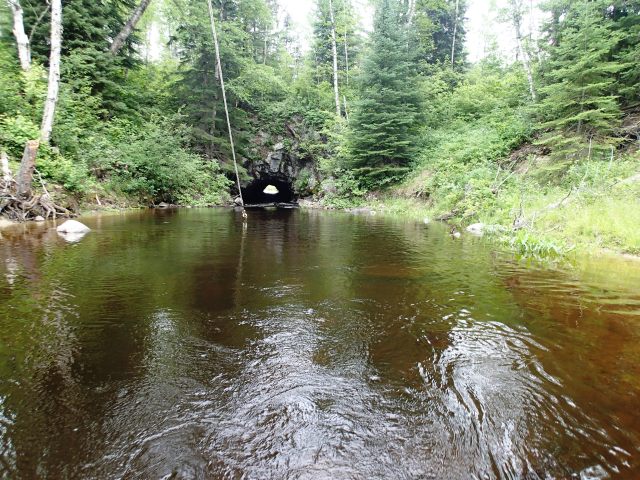 The storm chased us off the lake and we enjoyed making and eating blackened Walleye tacos with all the fixings. 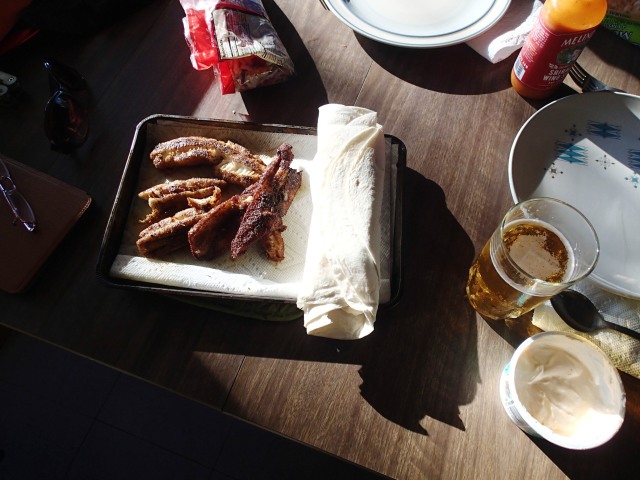 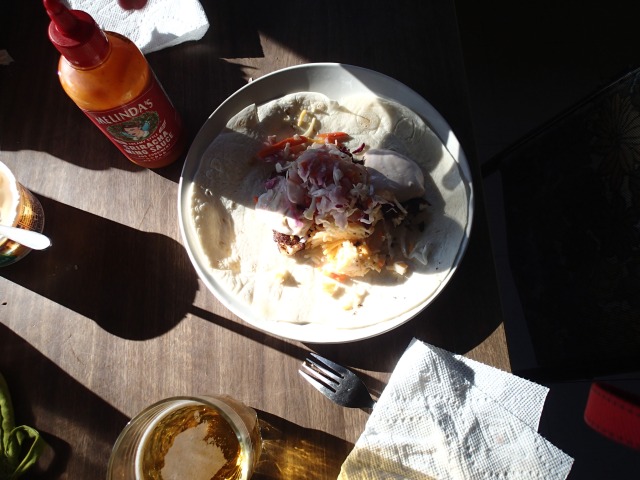 Storms rolled through frequently for the rest of our trip.  We fished in the rain, but when the lightening started, we found a safe spot on shore until the storm passed through as quickly as it started.  Our rain gear got a good work out!

We did see lots of Eagles, Herons and this Loon on her nest.  Also saw a Loon with 2 baby chicks on her back, but not close enough for a picture. 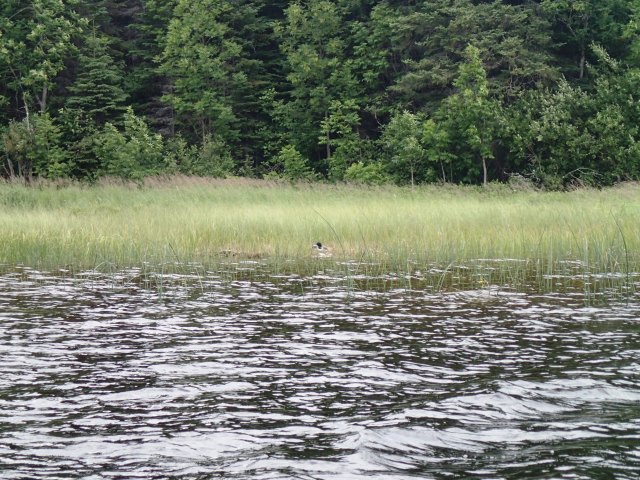 We also spotted the world’s largest Robin with huge red breasts near our cabin. 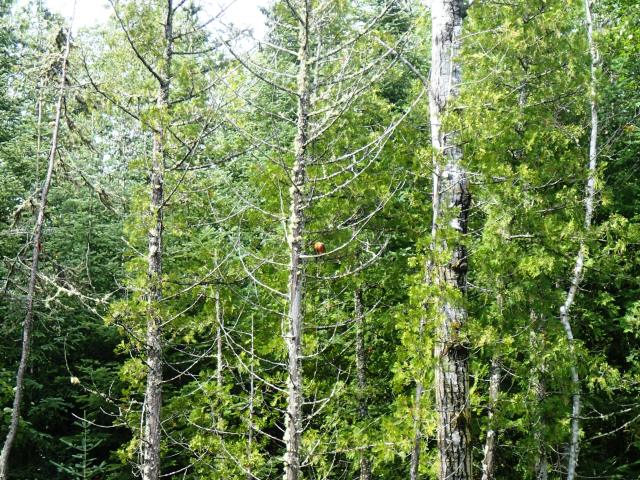 In the small world category, Jason, the guy in the cabin next to us, was wearing a hat from Ixtapa-Zihuatanejo were Linda and I have been vacationing for 30 years – (http://stevepelton.com/Mexico.html).  Jason is a very serious fisherman and loves salt water fishing out of Zihuatanejo. Jason and his Dad were visiting Ghost River from New Jersey and they took the flat bottom boat ride back to our car with us.  Jason noticed that Linda was wearing a jacket from Rum Runners Restaurant in Cape Coral, Florida.  We have vacationed in the Cape Coral/Fort Myers Beach area for many years.  His mother has a condo in the Cape Harbour development next door to the restaurant.  Small world indeed!

While we had driven up using the more direct route through International Falls/Fort Francis to Dryden to Sioux Lookout, we decided to take a different route back home.  We took Hwy 516 back to Sioux Lookout, then the winding Hwy 642 to Silver Dollar, which is located south of Savant Lake and Sturgeon Lake.   We got on the main Hwy 17 in Ignace and went past the Graham Road were so many of our wilderness fishing and canoeing trips started.

We spent a wonderful evening along the Lake Superior waterfront.  We stayed at the beautiful and newly opened Delta Hotels by Marriott Thunder Bay After easting fresh fish all week, we enjoyed a great steak dinner at the Prospector Steak House and Brewery. A festival was going on at the waterfront, so we walked around and enjoyed a beautiful evening on the big lake and admired the view of the Sleeping Giant. 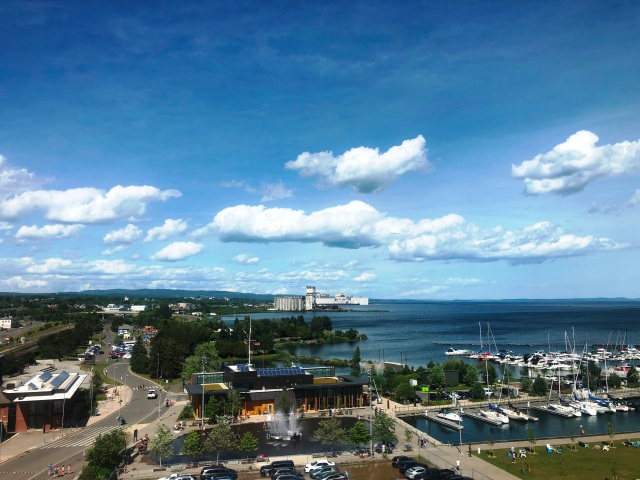 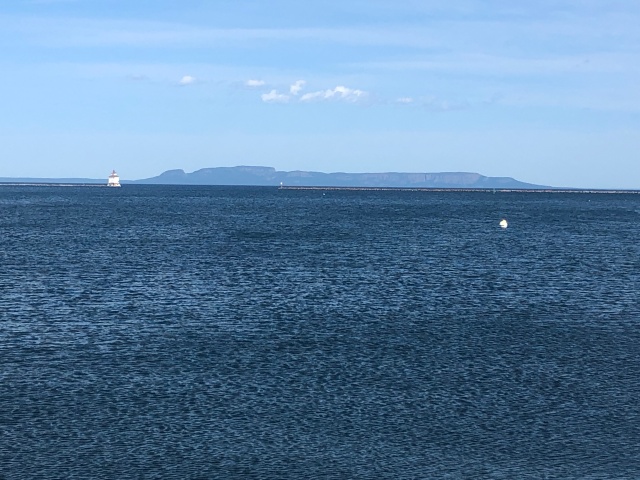 A wonderful trip ended when we returned home after a major storm, to find the power out, trees down across the road and against one of the buildings.  Nothing major. 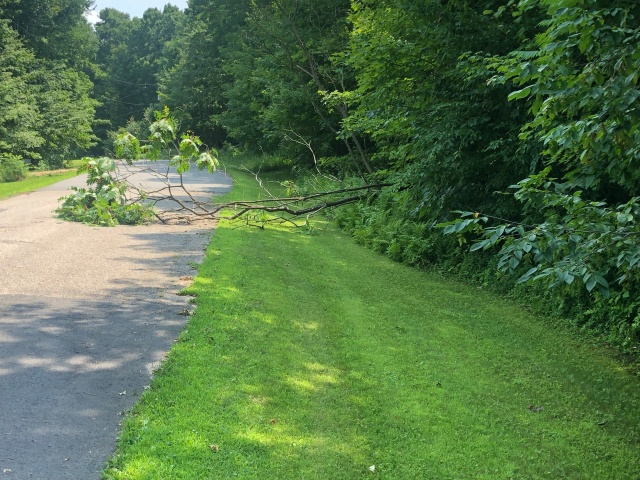 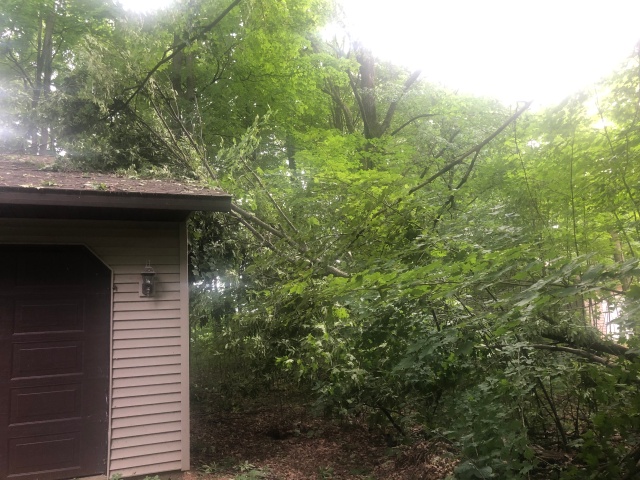